Unfortunately, I was admitted to the hospital Thanksgiving morning at 3 AM. I had my gallbladder taken out on Friday afternoon. Hopefully I’m being released today on Saturday. This is going to put a little damper on things as I am not allowed to lift anything heavier than 15 pounds for about six weeks. So, things will get done in the farm but at a slower pace.

Chicken Strike is over!

Our chickens have finally put an end to their strike and seem to be much more productive. We will be back to making larger deliveries. 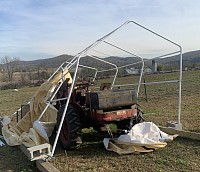 Monday’s windy storm mangled our hoop house that was temporarily covering the tractor. We will need to repair it if we will be able to use it as a Greenhouse in the spring.

Nala is a new Foundland Puppy. She will be raised to guard the chickens and geese. Purchasing Rosie was made possible by grants from Walmart and Giant. 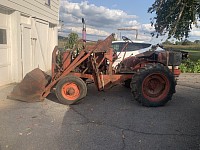 Thank you again to Nate from Elverson, PA who not only donate this 1949 Case Tractor, but also taught Jacob and I a bit about welding and delivered it to our property.

Thank you to Corey, in Exton, Pa for donating another Chicken Coop to welcome our new members of the flock.

In truth, we just painted the front so that we could shift it in place and not have to moved it again. It is heavy. Ready for the new additions to the flock.

Thank you to Stacey in Pottstown, Pa and Kenny in Greenland, Pa for the donation of extra shingles. These will be used to repair the roofs of the Chicken coops and geese houses before the winter.

Picked up the Chicken Coop 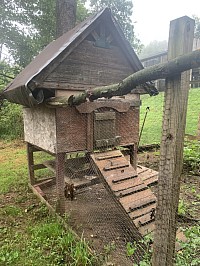 A woman bought a house to fix it up and flip it. In the backyard, was an old chicken coop. She was willing to donate this to the ministry. She said, “if you can get it out of here“ you can have it.
In order to remove it, I had to ask the neighbors who lived at the bottom of the hill if we could drive on their property. They said yes if we were Willing to remove a huge pile of firewood that they had. Of course, he said “yes”. We could always use the firewood. So, it was a win-win.
Since the plan is to increase our flock, this is going to work out great.
Thank you to Megan in Boyertown, Pennsylvania as well as Mr. and Mrs. Walsh who allowed us to drive on their property. What a beautiful couple, married for 67 years.

Would someone actually donate a farm tractor?

So again, perusing Facebook marketplace, I began asking people (seems crazy) if they would be willing to donate their old farm tractors that they would have for sale. Well, we actually had someone say yes. We went to go look at it today.
It was in Elverson Pennsylvania. We had a nice long conversation with the man, Nate. We will not be able to get the tractor until October. We are very grateful.
He is actually willing and wants us to come and weld a couple things on the tractor before we take it home. I don’t know how to weld and neither does my son Jacob. But he wants to teach us. So, not only are we getting a tractor but also a new skill.
Thank you Nate from Elverson Pennsylvania. Your kind heart is going to help a lot of people.

This past spring, our Rototiller broke. So, I planted and dug most things by hand. Again, on Facebook marketplace we found this Rototiller. The man asked for $50. I thought this was a fair price, so I was willing to pay it. When I went to pick it up I spoke to him about what we were doing and about our ministry, he freely offered to donate it to the ministry. Thank you David from Boyertown, PA 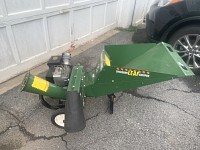 We have been in need of a chipper for a while to take care of the brush on the property as well as make mulch and  compost for the gardens. I saw this on Facebook marketplace and kindly asked if they would be willing to donate it. It was from an estate situation and they said “yes“. Thank you James from Reading Pennsylvania for this kind donation. This is going to help out a lot.

The gift of prednisone

Because of the bee stings, the doctors put me on prednisone. It seems to keep me awake all the time. So, I have been getting more office work done than I ever have before. It’s also giving me the opportunity to research equipment and other needs for the ministry. Being up late, I discovered the glory of “Facebook marketplace“. There are many things on the marketplace that people are willing to sell or giveaway. As I have been praying about it, I’ve been prompted to just start asking people if they are willing to donate items to the farming ministry. I’ve had a sense, through prayer that something really good is going to come of this.
1 - 2 - 3 - 4 - 5 - 6 - 7 - 8
Made with SimDif